We Swim Actors Reflect on the Play

Working on a world-premiere play that is both deeply personal and unconventional is an exciting opportunity for the cast bringing it to life. I asked the four actors of We Swim, We Talk, We Go to War to share some of their thoughts on the play and their experience.

ADAM EL-SHARKAWI on the message of We Swim… What I love about Mona’s writing is that she is very open and articulate with all perspectives. I find myself going back and forth with whom I side with. In a way, that is what makes good theatre. There are no clear “winners” or “losers.” There are just human beings expressing their views, wants, and desires. That dialogue, particularly civil discourse, is very important right now. It’s easy to go onto social media and argue with someone. But to talk face to face, to listen and to attempt to empathize, that’s more difficult. That takes work. But it’s work that is worthwhile.

TRE’VONNE BELL on playing a soldier… I have never served in the military so it was somewhat challenging to play this character, not having seen that life first hand or had the discipline to wake up at four in the morning. You can’t fake experience. But developing my character came with relative ease for me because of my family. I have so many family members who either currently serve in the military or have served. I’ve heard stories from them all, from the good to the bad to the questionable, and I incorporated those tellings into the memory of my character.

JOSHUA CHESSIN-YUDIN on portraying a character inspired by a real person… Despite the fact that my character (HE) is based on the playwright’s nephew, I have taken the liberty to not make it an imitation of that real person, but instead an interpretation of what I feel I know and understand about this character through the script. Playing someone who is so war-focused and into that world is a challenge, but not a challenge I find insurmountable. Since I don’t have any experience with the army or the ROTC, I had to do some research to educate myself on a soldier’s way of life, discipline, etc.

SARAH NINA HAYON on building and relating to her character… I modeled my character after people in my life that are like her. And of course there is so much of Mona [the playwright] in her. So I try to bring all that into my character. And I relate to her. For example, both military and Arab cultures are not ones that I am familiar with, but that works for the character. She has preconceptions about the military which her nephew challenges. And I am by birth half Egyptian but was not raised in that culture. So I can relate to the yearning my character experiences in wanting to belong in her heritage. 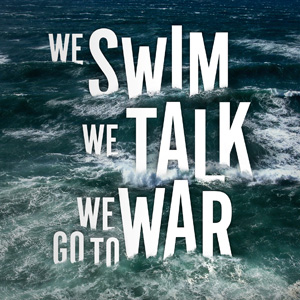