This article is written by Scott Horstein, a team member of the second partnership between Golden Thread and Literary Managers and Dramaturgs of the Americas. As a ReOrient Publications Dramaturg, Scott reports from ReOrient Camp this past July where the festival’s cast, creative team, and Golden Thread staff gathered for preliminary meetings and rehearsals for the fall festival.

In Room 225, Founding Artistic Director Torange Yeghiazarian is telling the directors to pick their battles. In Room 226, actor Lawrence Radecker is feeling his way through Naomi Wallace’s monologue play The Book of Mima, which purposefully obscures its character’s true identity. In room 227, lead dramaturg Nakissa Etemad is helping early-career playwright Niku Sharei track the logic and sci-fi “rules” of her futuristic play In Spenglic, where the characters carry their identities around as block letters in see-thru holsters.

The twentieth anniversary of Golden Thread Productions’ ReOrient 2019 Festival of Short Plays is officially underway, beginning with an incubation weekend in July that the company calls “ReOrient Camp.” As Golden Thread’s signature program, ReOrient Fest capitalizes on the short play format to dramatize the diversity of the Middle East, to provide alternate perspectives and to counter dominant stereotypes. Most of the plays have never been produced before, ever or in the United States. Torange says the goal is not just cultural but aesthetic diversity. Here’s the aesthetic challenge: five actors performing seven short plays in wildly different styles that somehow should feel like a coherent single narrative.

Here at Camp, cast, playwrights who are local, directors, and a shared design, dramaturgy, and stage management team hold initial concept meetings, company read-throughs, and rehearsals. All this activity happens simultaneously in a suite of rooms graciously provided by Roberto Gutiérrez Varea, joint founding faculty of the Performing Arts and Social Justice Program here in the Masonic Building of University of San Francisco, the generous hosts for the past three festivals since ReOrient Camp began. Full rehearsals begin in September at Golden Thread’s home at Potrero Stage in San Francisco, where the show opens on October 21.

What’s impressive is the company’s clarity of process. Part and parcel of the new play movement in the American theatre, Golden Thread marries leading play development practices with a commitment to full production (as opposed to staged readings) of these short plays. Torange encourages the creative teams to have opinions about each other’s areas, to dialogue and disagree when necessary, not for the sake of provocation but for the sake of shared solutions. When it comes to the cultural explorations within the festival material, she explains, “Some topics may be difficult to talk about, but this is the place to do it.” By the end of the weekend the writers will have begun rewrites for final rehearsal drafts. 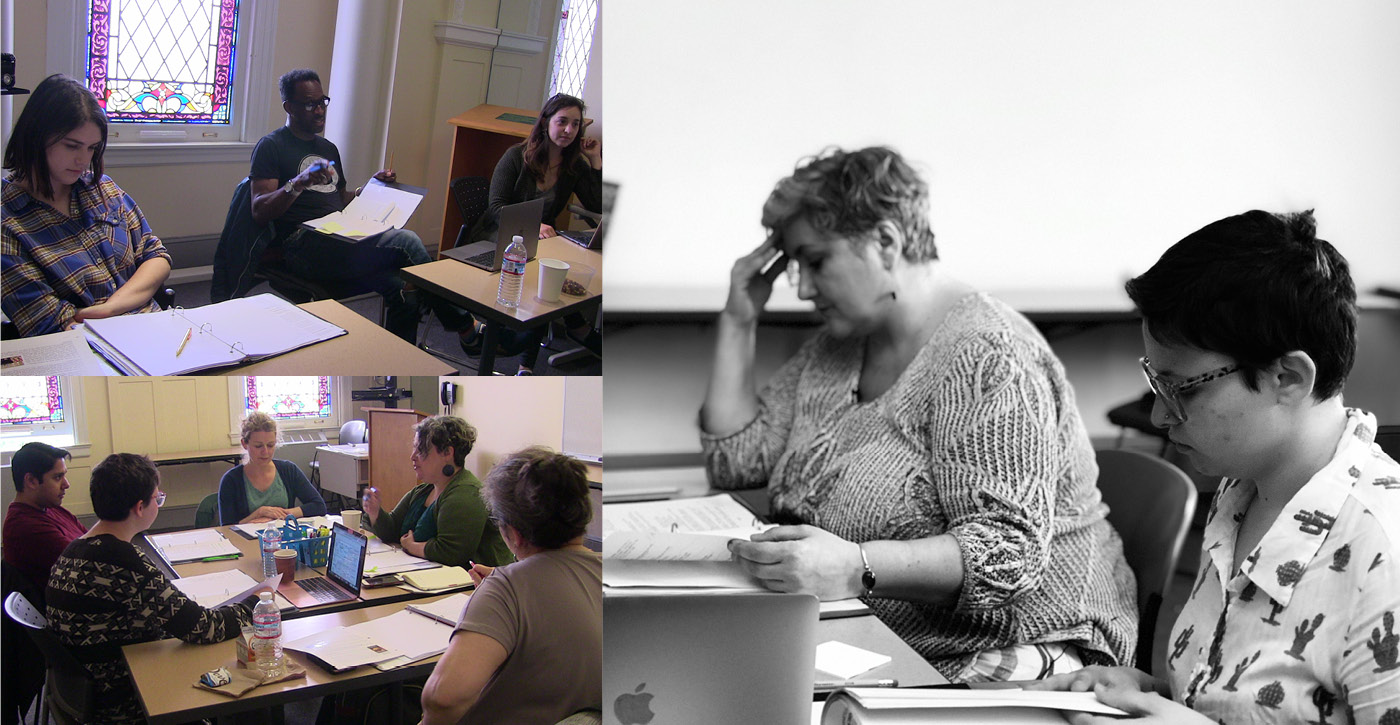 As part of a second-time partnership between Literary Managers and Dramaturgs of the Americas (LMDA) and Golden Thread, ReOrient Fest features dramaturgy at its center in a way I haven’t seen before in other festivals. Lead dramaturg Nakissa Etemad serves as casting director and oversees script development of the festival plays, while managing a team of research and publications dramaturgs (Emily DeDakis, Laura Espino, Michael Malek Najjar and myself). Each play’s team receives Notes & Context, one page front and back of painstakingly culled research on the specific subjects and countries featured in each play. Torange encourages the creative teams, wherever possible, to emphasize the specificity of cultural context and to gain a deeper understanding of the Middle East in the process. The Book of Mima’s team and director Rebecca Novick contemplate the wondrous “gingerbread” style of historic Yemeni architecture, while her team of Noor and Hadi Go to Hogwarts reviews social media posts from children under bombardment in Syria.

The Notes & Context sheets also feature essential insights from interviews conducted with each playwright by the dramaturgy team. The nature of short play festivals makes it challenging for far-flung writers to be in the room, so the dramaturg’s role as advocate for the playwright becomes particularly beneficial. Many of this year’s writers live outside the Bay Area: Naomi Wallace and Rendah Heywood (U.K.), Mustafa Kaymak (New York City), Lameece Issaq (L.A.), and Yussef El Guindi (Seattle). Betty Shamieh and Niku Sharei are Bay Area natives and join the Camp weekend.

Over the course of the long weekend, the artists roam from room to room, weaving the festival together, recombining in different groups throughout each day from rehearsal to meeting to communal meal to rehearsal, forging relationships, plumbing the depths of the material. How will they embody each play when the show finally opens in October? 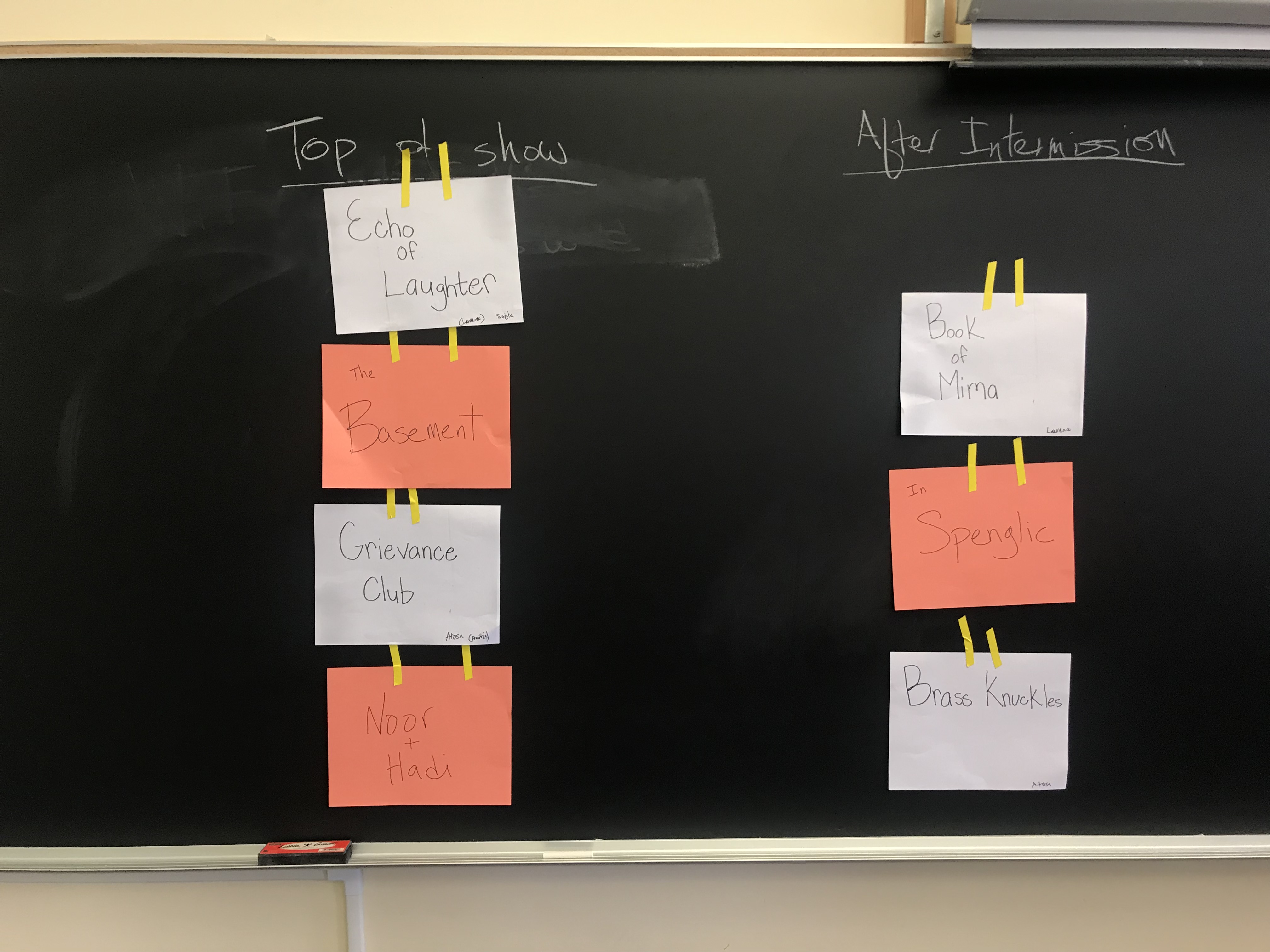 The tentative line-up of plays are placed on a chalkboard. // Photo by Michelle Mulholland

Some choices have to do with character. In Brass Knuckles by Yussef El Guindi, the question is how to costume the lone character Maysoon, played by Atosa Babaoff, as she tells the audience about wearing hijab on the streets in the U.S., and how she plans to defend herself. Kate Boyd, the scenic designer, notes that brass knuckles are illegal in California. What does this say about the character? Torange, who is directing, wants to avoid the stereotype of hijab meaning a “traditional” look and says she imagines the character as “sporty.” The design team starts to imagine her as a single woman, without kids, maybe the kind of person who has a Bruce Lee poster on her wall. What costume, set, light, and sound choices might this imply? What might it imply about how the actor portrays the character?

Other choices have to do with the “world” in which the play takes place. For In Spenglic by Niku Sharei, the science-fiction office environment of the fictional company GloBtron might initially seem to suggest a high-powered, sterile environment. But, taking her cue from the typical busy work and curious office politics in the plot, director Lisa Marie Rollins says she wants the choice to be “dingy” rather than “sterile,” maybe with dingy fluorescent-type lighting. To her, at this point, the world of the play seems “sick.” She further queries Niku about a prop, “What do the block letters look like in your mind? I want to know so I can fight for it.”

Still other choices have to do with levels of reality and point of view. For The Basement by Mustafa Kaymak, director Michael French asks the creative team to walk a fine line between choices that would indicate naturalistic versus subjective reality. Michael asks the actors to choose what he terms a more “mythic or formal” style of delivery instead of a “contemporary” style, in order to achieve a heightened sense of size for the characters and dialogue. The team discusses how the Turkish setting of this military thriller might manifest, while in an interview in the dramaturgical Notes & Context sheet, Mustafa breaks down the role of gender in the Turkish military. 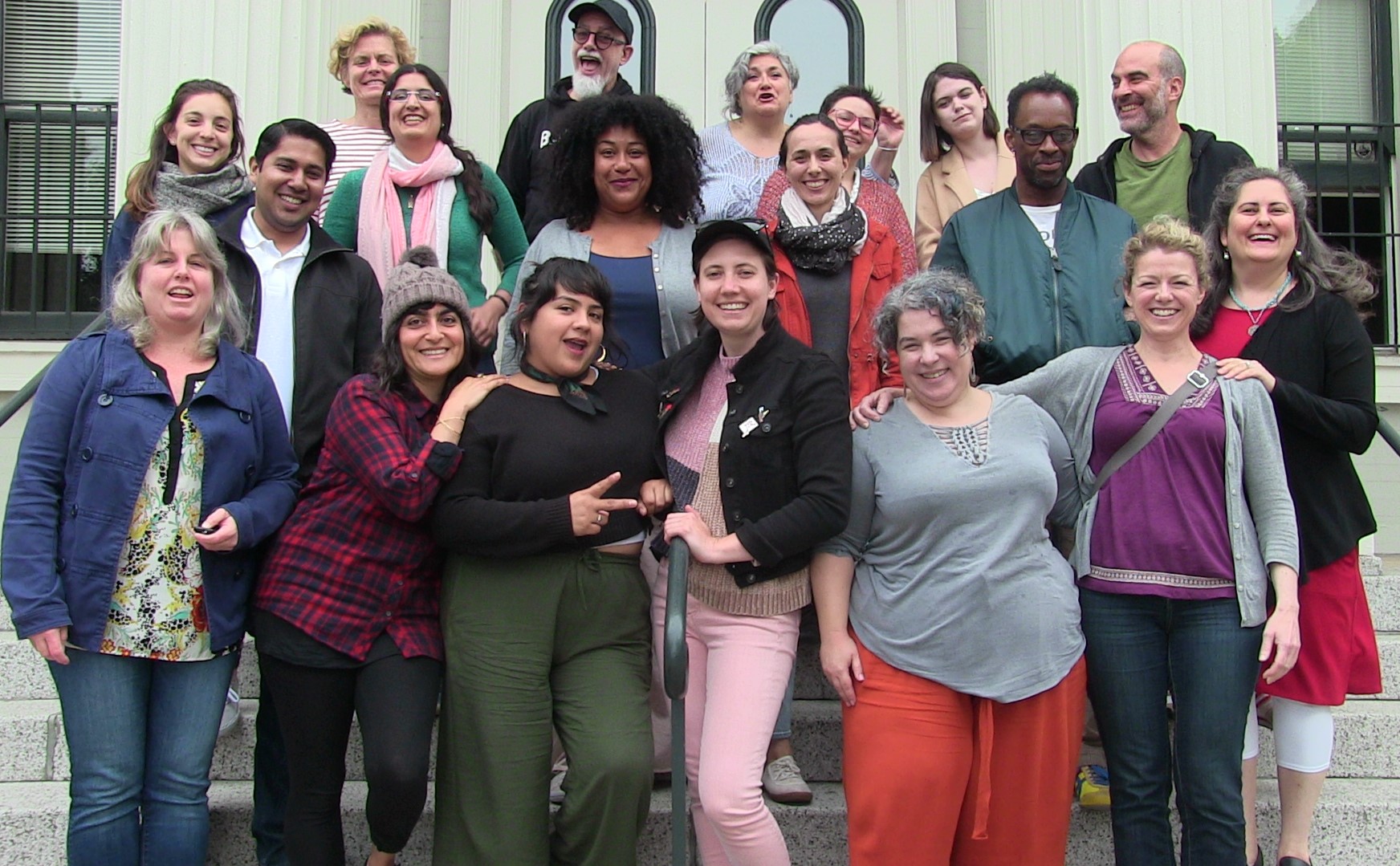 The Camp weekend culminates with the entire ReOrient company in room 228 to hash out a running order for the plays (How to juxtapose tone and subject matter? How to give the five actors time for costume changes?) then read all the plays out loud one more time, in that order. Brooke Jennings, the costume designer, discusses color progression for the actors over the course of the show, while James Ard, the sound designer, focuses on the unifying potential of audio transitions. And the dramaturgs chime in, helping sort out the overall story that the running order implies.

Two months later we’re at the first full rehearsal for the festival. It’s September 18, at Golden Thread’s rehearsal and office space at Potrero Stage. We read the plays, we see presentations by the designers, we hear the directors and the lead dramaturg describe the essence of each play. Inspired by the warmth, fierceness, and vision of Golden Thread and the Camp weekend, writers have clarified narratives, directors have refined concepts. In the bright, hopeful light of the rehearsal process to come, we end the read-through with the final lines of Yussef El Guindi’s Brass Knuckles, the last play of the evening:

Hello day. I am ready for you. Are you ready for me?