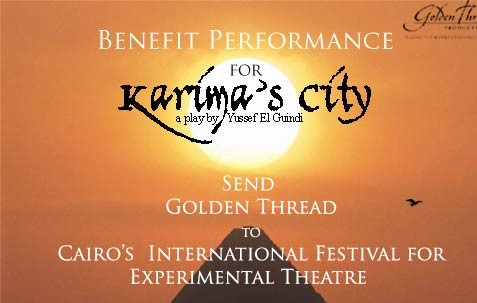 San Francisco Bay Area’s own Golden Thread Productions is the only American company invited to 2004’s Cairo International Festival for Experimental Theatre. Hailed as the most important of the theatre festivals in the Arab World, 2004 is the sixteenth year of this annual event. The festival opening ceremony on September 20th is directed by Khaled Galal, one of the leading figures in the Free Theatre movement in Egypt, signaling a shift towards inviting new blood into the festival specifically and possibly, the Egyptian theatre scene in general. The 2004 program boasts of hosting 66 troupes representing over 50 nations.

As international and broad-based as the Cairo festival is, American companies have rarely been invited to present their work there. In fact, Farouk Hosni, the Egyptian Minister of Culture, was confronted with a minefield of questions about the wisdom of choosing an American theatre academic and practitioner Gilbert Neil Lazier, as the head of the international Jury. According to the festival daily newsletter, The Experimental. In this atmosphere perhaps it wasn’t surprising that Golden Thread Productions presence in the festival also caused quite a stir.

Report from the Cairo Festival

Despite heightened security around the production, the two performances of Karima’s City proceeded as scheduled in the breathtakingly beautiful National Theater nestled in the bustling Ataba Square in the center of Cairo. Both performances were attended by Salwa Bakr who participated in passionate Question & Answer sessions following the performances; the second evenings lasting longer than the performance itself! Also notable was a real difference between the audience attending Karima’s City and other presentations in the festival. In general, most performances in the festival were attended mainly by other festival participants as well as university students of Drama. However, Karima’s City seemed to attract a wider cross section of urban intellectuals including more established critics and writers. This became very clear during the Q&A sessions where Ms. Bakr was questioned about the content and her stylistic choices in the original story. Furthermore, the majority of the women in the audience were not veiled in contrast to the public at large including most of the festival attendees where the greater part of women did wear a head scarf. One might say the audience of Karima’s City truly reflected Ms. Bakr’s generation and sensibility.

Ms. Bakr seemed extremely supportive of Golden Thread Productions and the performances. She indicated that the adaptation by Mr. El Guindi succeeded in capturing the critical points in the story as well as the overall atmosphere of the city and personal qualities of Karima, the central character. The one scene in the play that proved most controversial turned out to be one where Karima compares bras to shackles, “handcuffs for the breasts.” When asked about this scene, Ms. Bakr contended that requiring a specific article of clothing from an individual, be it a tie, bra or veil, is an infringement on the individual’s right to choose. Although traditionally such issues have been waved off by political activists as trivial, they in fact represent a fundamental shortcoming in the mainstream approach to freedom of expression.

The festival closed the evening of September 30th in an elaborate ceremony evocative of the Oscars. Joan Schirle, founding artistic director of Dell Arte International, was among the honorees, which also included Sudanese critic and playwright, Khaled Al-Mubarak Mustapha and Algerian actress and director, Sakina Mekkiou, among others. Omar El-Hariry, pioneering Egyptian theatre, film and television actor was awarded the lifetime achievement award. Notable among this year’s winners was Iraq’s Sorry Sir, I Didn’t Mean It, recognized as Best Ensemble Work. The play was an absurdist response to invasion by an unstoppable force. The award for best performance was granted to two plays: Netherland’s Bambie 8 and Lebanon’s They Are All Here.

Yussef El Guindi, although primarily a playwright, has also been active as a poet, actor and filmmaker. His adaptation of Chekhov’s A Marriage Proposal, staged by the Arab Theatrical Arts Guild in Dearborn, MI, was nominated for several PAGE awards including Outstanding Achievement in Original Play or Adaptation. His last poem, Crossing Borders, was published on placards and placed on buses as part of Seattle’s Poetry and Art on Buses. His short film, Love Stalks, won an award for best short narrative film at the Seattle Underground Film Festival and was aired on KTEH. A native of Egypt, Yussef holds an MFA in Playwriting from Carnegie-Melon.

Arlene Hood has been directing with Golden Thread Productions for the past four years. Besides freelancing as a bay area director and actress, Arlene is the theatre arts instructor and the chair of the Visual and Performing Arts department at Moreau Catholic High School in Hayward. Her students have received numerous awards and recognition for their outstanding work. During her tenure as department chair at MCHS, the Visual and Performing Arts department has twice received an award for outstanding excellence from the California Alliance for Arts Education. She has a theatre arts degree from CSU Hayward and is a board member of the California Educational Theatre Association. An avid traveler, Arlene has had the opportunity to direct and perform for the Edinburgh Fringe Festival and the Festival of Amathus in Cyprus.

A native to the Bay Area, Angela Demmel has been dancing, teaching and choreographing modern, jazz and musical theatre for the past several years. She received her Bachelor of Art degree in Theatre Arts, Dance Emphasis from California State University, Hayward. Upon completion she was awarded a Graduate Teaching Fellowship at the University of Oregon, Eugene where she focused her studies on theatre/dance integration. Ms. Demmel currently works full time as director of dance at Moreau Catholic High School in Hayward and is a part time lecturer at CSU- Hayward.

Bernadette Quattrone feels lucky to be able to play Karima once again, a character that is very inspiring in less than inspiring times. Bernadette has performed with Golden Thread Productions in ReOrient 2001 and 2003. In the Bay area she has worked with Word for Word, The Willows Theatre, Berkeley Repertory Theatre, New Conservatory Theatre, Impact Theatre, Broken Buddha Productions and The Napa Valley Shakespeare Festival. She is a company member of the Bay Area’s all-female Shakespeare Company, Woman’s Will, where she played her favorite role of Angelica Bianca in The Rover. Bernadette teaches drama at the Marin School of Arts and Technology and The Willows Theatre Conservatory.

Vida Ghahremani is a veteran of TV, stage and screen with numerous credits in both Iranian and Hollywood productions.She is also a painter and designer.An active member of the Iranian community in the Bay Area, Vida currently teaches Theatre and Persian conversation at the Persian Center in Berkeley.

Simin Yahagi last performed in 1999 in a Shakespeare Festival in Bologna, Italy. She lives in Oakland where she teaches yoga and is an intern with KPFA Radio.

Patrick Alparone recently graduated from Sonoma State University. Recent credits include Constantine in Big Love, Don Pedro in Much Ado About Nothing, and the Monkey King in Monkey King and Other Children’s Stories from around the World. This November he can be seen in Director’s Cut: a Feast of 1-Page Plays at the Phoenix Theater

Leo Rodriguez loves traveling to do theater. International travels include the International Women’s Playwrights Festival in Galway, Ireland and The First Amathus Festival in Cyprus where he played Tieresius in Euripides The Bacchae. In the U.S., Leo played Long John Silver in the Missoula Children’s Theater tour of Treasure Island. Other roles include Angelo (Measure for Measure), Sir Toby Belch (Twelfth Night), Mr. Toad (The Wind and the Willows), and Creon (Maria Lampidara-dou Pothous' Antigone: Or the Nostalgia of Tragedy). Musicals include Ain’t Misbehavin, A Funny Thing Happened on the way to the Forum (Pseudolous),Jesus Christ Superstar, Kiss Me, Kate, and Man of La Mancha. Leo is currently working on a one-man show called Chosen, which goes into production in late October.

Prior to moving to California, Tara Coyote Days worked professionally as a stage manager in Oregon. She stage managed the original production of Karima’s City and is thrilled to revive this production in Cairo.

Many thanks to our donors!