by Torange Yeghiazarian, adapted from the 5th century classic by Aristophanes

An Outrageous Comedy about Sex and War 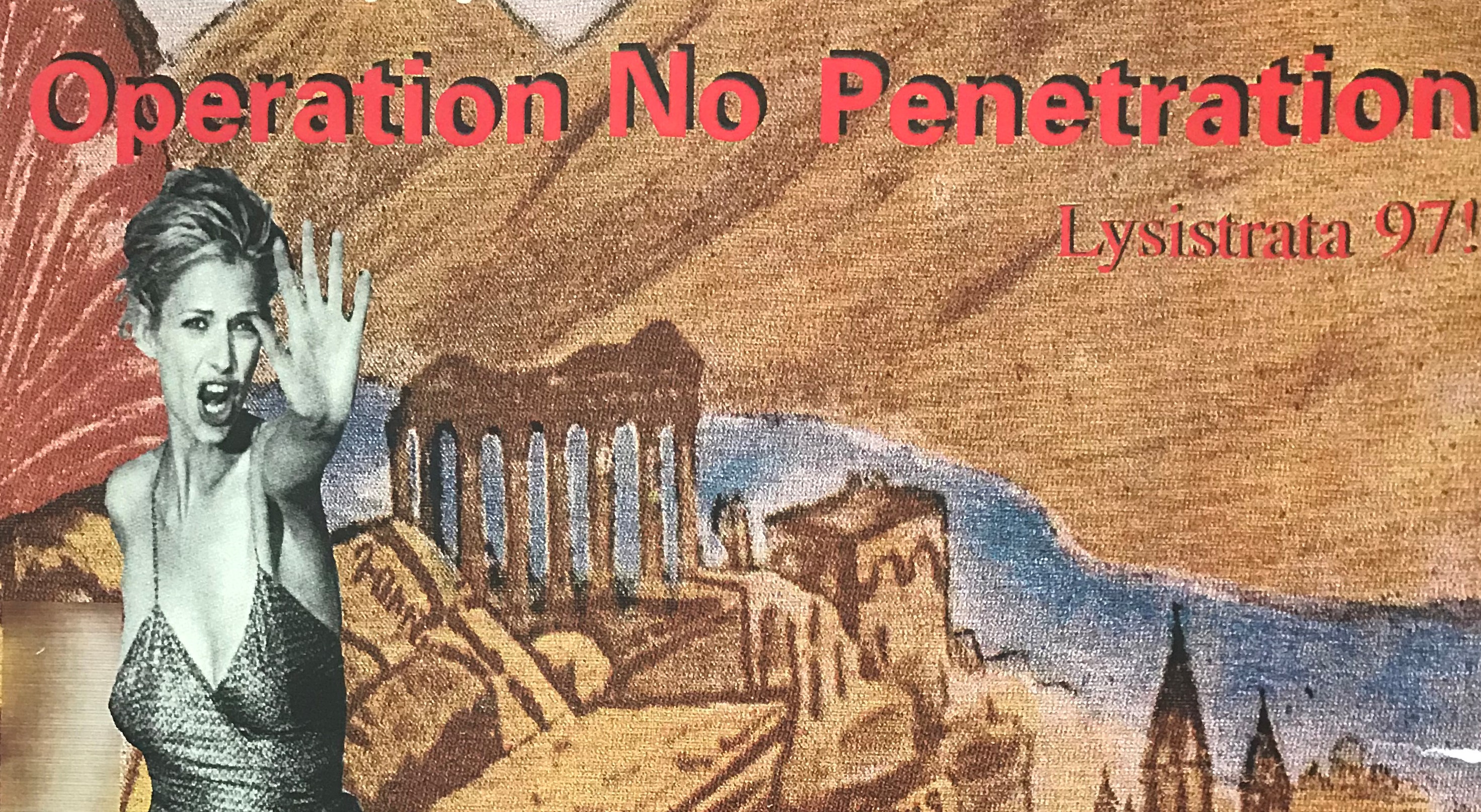 A contemporary adaptation of Aristophanes’ Lysistrata focused on the Israeli-Palestinian conflict. In this production, the Jewish-American Lysistrata along with the Palestinian-American Kalonike, unite women from around the world, including the Iranian Lampito, to join in on a global sex strike in order to force men to stop war and sign the World Peace treaty. The play attempts to emphasize the global nature of war in our time and the need for a global peace settlement.

Written by Torange Yeghiazarian, adapted from the 5th century classic by Aristophanes

Produced in 411 BC, Aristophanes’ Lysistrata is one of the most popular of the extant Greek comedies.  It followed shortly on a disastrous phase of Athens’s war with Sparta.  Many of Aristophanes plays use a utopian premise to criticize war.  Lysistrata addresses the politics of its time in a variety of ways.  Lampooning the politicians of the time and Athens’s expansionist policies on the one hand, and utilizing the social inferiority of the women in Athens as a comic ploy, on the other hand.  Aristophanes was a master at highlighting social hypocrisies.  But at the same time the play is by no means “feminist” in its approach.  Aristophanes pleads for peace and advocates family values of his own time, seeing women as child bearers and home makers with sexuality being their only weapon.

Currently teaches at San Francisco State University after graduating from its Theatre Arts program with honors.

Born and raised in Iran. Has been a Berkeley resident since 1980 and is a founding member of the Darvag Theater group from its inception in 1985. Bella has acted in nineteen Darvag productions and has collaborated with other Bay area theater groups.

A star-gazing Sagittarius, Reema likes long walks on the beach and smores in the sand. Reema came to acting at the behest of her Doctor who thought theater would be a good therapy for her severe case of Road Rage. She is, however, currently working on her issues and will be entering the Betty Ford Road Rage Clinic as soon as “Operation No Penetration” closes. To pay the bills, Reema is one of the assimilated thousands who e-mails her way through the 9 to 5 day. Presently sucking the last drops to come out of the parental spigot, Reema is desperately looking for an apartment in the City. So, if you’ve any leads…..

She finally has a biography ! Whoopee ! Hallelujah ! Praise the Lord !. She’s going to graduate from San Francisco State University (only three units to go). That’s all there is.

Jennifer is a Theatre Arts Graduate of San Francisco State University. She has acted with the Belasco Theatre Company and in S.F. State University productions. This is her first venture into updated Greek Comedy and she’s enjoying every minute of it.

Dylin began acting at HB Studio in New York, and has trained at ACT and Bay Area Theatre sports in San Francisco. He appeared on stage in “ Phaedra’s Love”, and will be performing “Our Dyke House”. His film credits include “ The Loner Type X”.

“Distracted”, “ Harold Darling!” and “ What Dreams May Come”. Special thank you to Allison for her love and support.

Born in Abadan-Iran, Sep. 6th 1957. Siamak received his engineering degree in England where he lived for 23 years before making his way to warmer and sunnier Bay Area. This is Siamak’s first foray into acting. And as he says “ It’s only a diversion, I am not giving up my day job!”.

Born in Vallejo, CA in 1946. My first play was " Spoon River” in 1984, in which I played five roles. After attending acting classes at City College and A.C.T., I began acting in independent films. My toughest role was a solo performance of " White Sands At The Marsh” using my own material. I hope to do more solo performances in the future.

Born in Iran in 1963. Has been in the United States since 1977. In the past 12 years, Visual Arts (painting, drawing, sculpture,…) have been his main format for Artistic expression. “Art for Art’s sake”, has been Ali’s guiding light and made him what he is now. An active member of the Darvag Theater Company (Iranian Theatre group based in Berkeley), he has performed continuously in the past 6 years. Catering to cultural gypsies of the borderlands, in Persian and English. “ I have discovered another format, and I have become addicted to it, I am yet to master it.”

A low-budget Bon Vivant of undocumented enthusiasms, Greg has gracefully submitted to Thespian Quarantine on stage, screen and mike. Most recently, he broke into French-language Theatre (encountering no resistance worth mentioning), disguised as the Scholar in Moliere’s “The Jealous Husband” and as God in Boris Vian’s “To Each His Own Serpent”. Look for him in “Love Without Pliers”, an ongoing saga about one man’s lonely struggle with varicose Brains. Behind his flamboyant personae lurks a man who likes plenty of naps.

Von Scott Bair celebrates the first anniversary of his acting career with this, his lucky 13th role. In 1998, he will produce stage readings of his plays “Revelations” and “The way of the Theatre”, as well as continuing his new career. His only question: “Why didn’t I discover Theatre 25 years ago?”.

Is a veteran San Francisco Bay Area thespian. This production marks the third time he has been in Lysistrata.

This production woudl not have been possible without the support of the following: