An original anti-war musical with puppets! 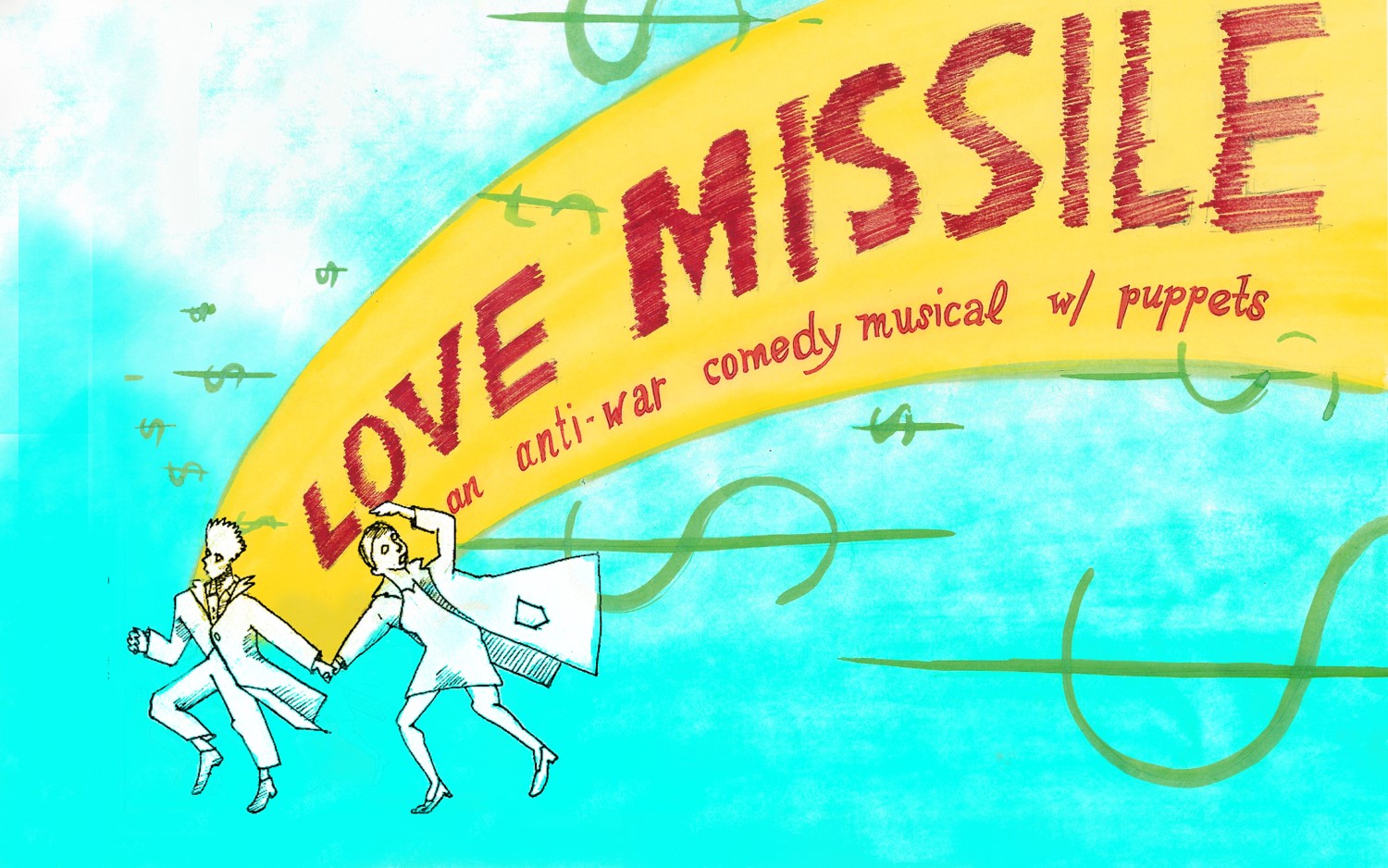 The play is a fusion of traditional American musical with Middle Eastern undertones as well as fantastical shadow puppetry. Original music is composed by Johaness Mager, Musical Director, composer, and Band Leader for Make*A*Circus from 1996 to 2002. Lisa Tateosian, dance choreographer, is a member of Khadra International Dance Theatre and Ballet Afsaneh, and has performed with Dance Brigade, CHODERA/dance, and Asian American Dance Performances.

When a Godzilla attack interrupts the source of Shappa-Imageanna’s addiction to consumer goods, the prominent scientist, Dr Z and his newly arrived assistant Sharifa, a legal immigrant from Distancia, work feverishly to find alternatives. Ultimately, they find importing the goods is the only option and as it turns out, Distancia has the best goods. The dictator of Distancia rejects the generous offers made by Shappa-Imageanna’s President leaving him no alternative but to attack – with Love, a drug developed by Dr. Z and Sharifa that induces universal love. But is Love really all we need? A surreal tale of passion, greed, denial and longing involving un-namable body fluids and orifice.

The Musical Director/Composer/Band Leader for Make*A*Circus in 1996-2002, Johannes Mager graduated from the San Francisco Conservatory of Music with a Bachelor of Music degree in Trombone and Composition. He is the co-founder of the New Music Ensemble, a leader of avant-garde music performance in the Bay Area in the 1970’s. He worked directly with such composers as John Cage, Morton Feldman, Terry Riley and Roman Haubenstock-Ramati. Johannes was the founder of the avant-garde music trio, Suono Della Fontana, which specialized in performing graphically notated music, and toured for several years in Europe. In the 1990’s, he wrote and performed a solo performance piece called Exit, presented at the Theatre Rhinoceros, toured with the Dell Arte Players, performing the music for their production of Redwood Trilogy, and wrote and performed the music and sound design for the Fratelli Bologna theatre group, and their production of Medea, which played for 6 weeks at the Cowell Theatre in San Francisco.

Janaki Ranpura is a puppeteer and physical theatre actor who studied at the LeCoq School in Paris. She has worked with Shadow Light Productions in the Bay Area, and co-created the original play Beneath Sita’s Belly, which ran in the 2002 San Francisco and Seattle Fringe Festivals.

Torange Yeghiazarian writes, acts and directs for the theatre and is the founder and artistic director of Golden Thread Productions. Among her writing/ directing credits are ABAGA (The Future), a lyrical tale of two generations of forbidden love: from Istanbul of 1915 to Jerusalem of 1935, and Operation No Penetration, Lysistrata 97! a contemporary adaptation of the classic Greek comedy where Palestinian and Israeli women unite to force their men to sign a peace treaty. Torange holds a Masters degree in Theatre Arts from San Francisco State University. A staged reading of ABAGA (The Future) presented by Immigrant Theatre in New York was reviewed in the American Theatre Magazine (April 2002).